The NovoMotion Base Schema Generator is used to generate a base schema. Once generated, the schema can be viewed or modified from the NovoMotion Schema Editor.

The Generator allows for the entry of a base file and a range of attributes. A schema is then generated for that range - with attribute 0 as the primary key. Only those attributes that are single-valued are included in the primary schema. It has the name of Filenamexxxx_auto.

The Generator also creates a separate schema for each multi-valued set in the range. The operator is asked if they want to include set elements outside of the entered range. Each generated set has the name of FilenameSetname_auto. The primary key for the set is defined as the controlling attribute of the set. 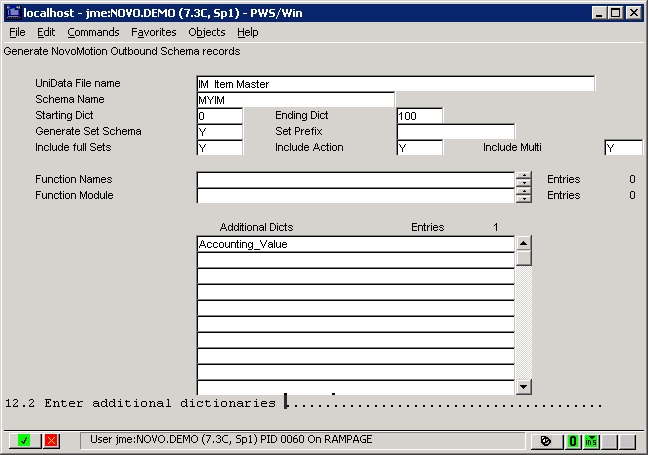 The schema creator takes the base file entered (UniData File name on screen) and builds a schema using the name entered (Schema Name) in the screen for the range of dictionaries specified (Starting Dict and Ending Dict).

Regardless of the range selected, attribute 0 is also included as the primary key of the new base schema.

Each muti-valued set (other than the standalone sets described above) is generated with the set prefix entered (Set Prefix) with additional components of the schema name entered and the specific set being processed. If the Include full Sets field is set to Y, any additional elements of the set found outside of the entered range are also included.

The Include Action toggle is used to specify if the @ACTION keyword is to be added. @ACTION is used for SQL tables that can have inserts, deletes, or changes. For a SQL table that only does inserts (like the Sales Analysis file), the @ACTION is not needed.

The Include Multi toggle is used to indicate that sets should include the @MULTIVALUEID. When this option is set, the primary key of any set is defined as attribute 0 of the U2 file along with controlling dictionary of the set.

The Additional Dicts field is used to enter fields outside of the range or I descriptors that also need to be included.